Dollar Up, Boosted by U.S. Yields and Hopes For More Stimulus Measures

The dollar was up on Monday morning in Asia, continuing a rebound over big gains in U.S. yields and hopes for more U.S. stimulus measures that saw some investors tempering bearish bets and seeing the dollar move further away from the multi-year lows seen recently.

The AUD/USD pair fell 0.77% to 0.7700 and the NZD/USD pair was down 0.73% to 0.7189. The dollar’s gain was the risk-sensitive Antipodean currencies’ loss, with even a second month of better-than-expected data in Australia failing to lift the AUD up. November’s retail sales were up 7.1% month-on-month, higher than October’s 7% reading.

The USD/CNY pair was up 0.22% to 6.4890. Data released earlier in the day showed that the producer price index (PPI) contracted 0.4% year-on-year in December, higher than the -0.8% in forecasts prepared by Investing.com and November’s -1.5% reading. The data also showed that December’s consumer price index (CPI) also beat expectations, rising 0.7% month-on-month and 0.2% year-on-year.

U.S. President-elect Joe Biden has promised “trillions” in extra COVID-19 relief spending as he and a Democrat-controlled Congress prepare to take office on Jan. 20.

Biden’s promise pushed the yield on the benchmark 10-year U.S. debt up more than 20 basis points to 1.1187% in 2021 to date, in turn helping the dollar to a one-month high of 104.095 yen earlier in the day, with better rates giving pause to some dollar shorts.

“The underlying source of the revival has been the aftermath of the Senate elections and markets anticipating that we might get substantially more fiscal support for the U.S. economy … everyone’s asking whether this changes the weaker dollar narrative, that’s why I think we’re getting a bit of a continuation of what we’re seeing on Thursday and Friday,” National Australia Bank head of FX strategy Ray Attrill told Reuters.

But Attrill is not buying a rebound yet, warning that shifts in relative yields tend to take time to play out in currency markets. The fact that extra stimulus is not yet guaranteed, as well as other factors weighing on the dollar, remain in place, he added.

However, a crowded trade in bets against the dollar, alongside the selloff in the bond market since the Democrats won control of the Senate during the previous week’s runoff elections in Georgia, has slowed the greenback’s steep and steady decline since March 2020.

“The weaker dollar narrative and broad-based ebullience for emerging markets have been challenged earlier in the year than we forecast, which may lead to a rethink of consensus trades, at least in the week ahead,” Barclays analysts said in a note.

“We stick to our non-consensus view that the dollar is likely to benefit from better growth and returns to capital over the remainder of the year,” the note added.

Dollar Up, Boosted by U.S. Yields and Hopes For More Stimulus Measures
Download as PDF 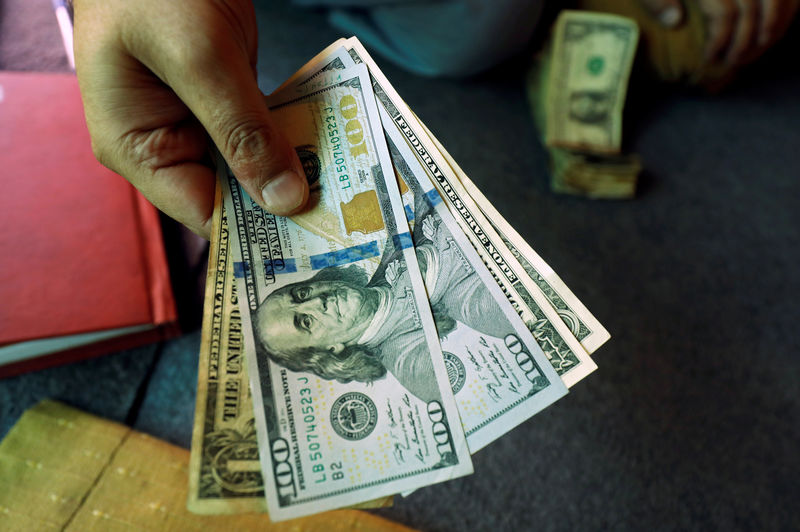 Dollar Down Even Amid Rising COVID-19 Cases

Dollar Down, With ‘Twin Deficits’ Likely to Extend Dollar Weakness Into 2021